The Zamfara State Government has clarified its directive issued to residents over the procurement of arms in the fight against banditry and terrorism.

Bello Matawalle, the Zamfara State Governor, made this clarification on Monday, while inaugurating four special committees at the Government House in Gusau, the State capital.

The Governor stated that the committees were established in order to assure efficient implementation of the security measures being taken to combat the resurgence of banditry in the State.

The four special committees created include the Special Standing Security Committee, the Management of Community Protection Guards, and the Committee on Intelligence Gathering and Bandits’ Informants.

According to Matawalle, recent weeks have seen terrorist assaults in Zamfara, particularly in the Bukkuyum, Gusau, and Gummi Local Government Areas of the State.

The governor reaffirmed that his administration would keep looking into ways to combat security issues and the hardship civilians faced at the hands of terrorists.

He also said that while the government was aware of the security forces’ efforts to combat the current level of insecurity, the lack of modern weapons and sufficient manpower was impeding those efforts, which is why it was decided that the public should buy weapons to protect themselves from terrorists.

Read also: Police cautions Zamfara govt over call on residents to get guns

In order to facilitate the work and travel of the special Committees, Governor Matawalle said that the state government had given them 500 motorcycles and 20 Hilux cars.

Earlier, Ayuba Elkana, the Zamfara State Commissioner of Police, revealed that the ban on firearms licenses was still in effect.

He also noted that the police had halted providing licenses to residents who want to own firearms.

Elkana issued this clarification on Sunday, in response to the state government’s order that the police command provide gun licenses to people entitled to bear arms.

Video: Reactions As Rich Man Wipes Couple Faces With Money At ‘Their Wedding’, Went Away With The Money 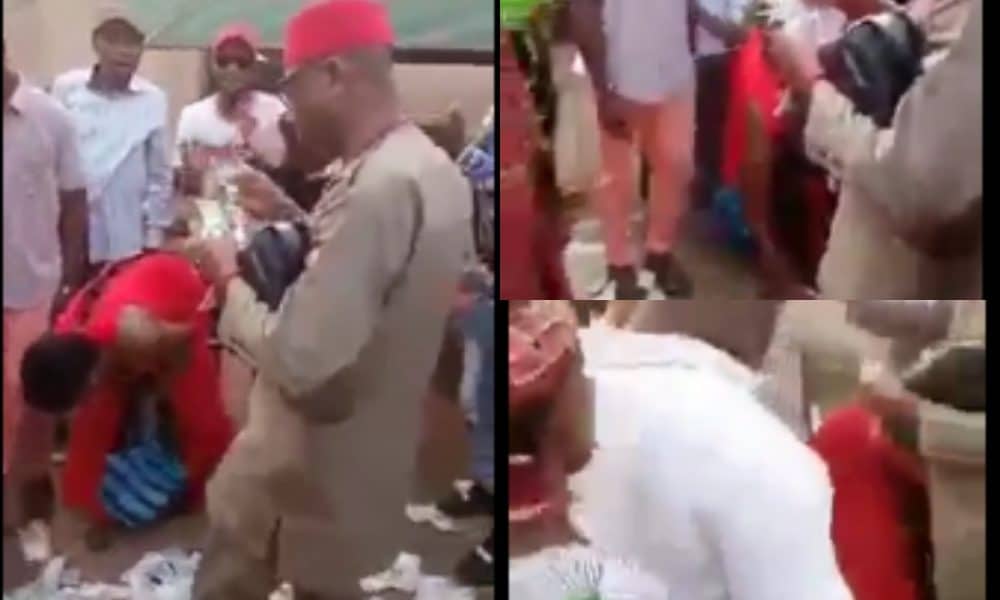 A viral video on social media has sparked reactions after a rich man was captured on camera doing something that calls for questioning.

In the video seen by Naija News on Facebook, the unidentified rich man is seen spraying money at a couple as they dance at their wedding.

His actions, however, has raised many eyebrows as he used one of the notes to wipes the bride and groom’s face before walking away with the particular note.

According to Munachy Harry, a social media user who shared the video, the wedding event took place in Imo state in January 2022.

Nigerians on the internet have been asking questions about the event, as they suggest the rich man’s action is weird and should be investigated.

Sharing the video, Harry captioned: “Let’s all be careful. Things are really happening.
As seen on the video below.

“A marriage was held somewhere in Imo, a man came and was spraying the couple dollars.

“At the end, he took one of the dollars rub it on their faces, and went away with it. The strange thing is, Why did he use it to rub their faces?

“Why didn’t he drop it after rubbing it on their faces? I pray nothing happens to the couple.”

Watch the viral video clip below:

See some of the reactions that followed below:

A Facebook user, Paul Mary was curious how the couples were carried away by the event not to have noticed what the man was doing to them.

She wrote: “They were just carried away by the money, I think something is wrong somewhere may God help us.”

On his part, Okechukwu Orabueze suggests the rich man’s action is beyond physical and hence should be investigated.

The netizen wrote: “The money he used wiped their destinies (cleaned their faces), he didn’t drop it and that sends a serious signal to the legends. Let them look for that man for spiritual release.”

Meanwhile, Uwakwe Gad Anya was offended by the Cameraman who possibly may have noticed the moment but kept mute.

“The cameraman must be vary stupid. After recording such he still kept quiet and let the evil go.
May this not be our portion in Jesus name,” Anya prayed.

“And they are there jubilating whereby the man has done the worst on the couple…he has taken what is bigger than the money he sprayed.

Also reacting, Glory Uzoeke Uzuegbu believed that the man’s power will fail since his ‘secret’ has been exposed.

“For posting and exposing it, the man has failed. He is doomed. The mouths of people are God’s mouth.
Wind will carry that note,” the netizen wrote.

“They should locate the man show him the video as evidence In case if anything happens to them they will hold him responsible,” Chiamaka C Agwunenu commented.

Chioma Ozonna Chiedozie, however, disagreed that the event was a wedding. He was curious if it was some kinda ritual that demands the scenario.

The Facebook user wrote: “It doesn’t look like a wedding to me. Could they be performing some rituals that require that? Hmmm nothing is impossible. Some humans are evil.

The Zamfara State government has sent 97 Islamic clerics on Lesser Haji to Saudi Arabia to seek God’s intervention on the banditry in the state. This came exactly two weeks after the government presented 260 Cadillac cars to all traditional rulers in Zamfara in recognition of their roles in the fight against banditry in the […]

US Govt Reacts As EFCC Arrests Suspect Wanted By The FBI

The United States government has reacted to the arrest of Osondu Igwilo, one of the wanted persons on the watchlist of the Federal Bureau of Investigation (FBI).

It will be recalled that the Economic and Financial Crimes Commission (EFCC) announced Igwilo’s arrest on Monday along with some of his accomplices.

As earlier reported by Naija News, the development was confirmed by the spokesman of the EFCC, Wilson Uwujaren, adding that Igwilo was the alleged leader of a criminal network of “catchers”.

Uwujaren noted that Igwilo was arrested alongside Okafor Nnamdi Chris, Nwodu Uchenna Emmanuel and John Anazo Achukwu at a studio in the Sangotedo area of Lagos.

Igwilo had been declared wanted since 2018.

The suspects were accused of fraud, money laundering, and identity theft to the tune of about $100millon.

It was gathered that the suspects allegedly perpetrated a scheme involving false promises of investment funding, impersonating United States bank officials in person and via the internet.

Reacting to the arrest, the American government on Monday through the US mission in Nigeria wrote on its Twitter account: “With Justice as our mutual priority, we congratulate @officialEFCC for partnering with the @FBI & arresting long-time wanted suspect Igwilo for fraud conspiracy, money laundering and aggravated identity theft.”

Meanwhile, no less than 559 former Boko Haram fighters have been freshly rehabilitated and reintegrated into the society through the federal government de-radicalization, rehabilitation, and reintegration (DRR) programme.

This is not the first time this will happen as Naija News understands that over 1,000 ex-Boko Haram fighters have gone through the programme.

The rehabilitation is part of the Operation Safe Corridor which allows repentant terrorists to be forgiven, trained, rehabilitated, and reintegrated into society and has been operational since 2015.

The latest batch of repentant terrorists had their graduation event on Sunday in Gombe State.