Nnamdi Kanu, the leader of the Indigenous People of Biafra, IPOB, protested the Department of State Services’ refusal to let certain lawyers into the Abuja Federal High Court on Wednesday.

As his trial resumed, the secret police prevented lawyers, journalists, and traditional authorities from entering the courtroom.

Delegates of the Igbo Traditional Rulers were also denied admission to the building by the DSS.

Traditional rulers have gathered in Abuja to show support for the IPOB leader, whose late father was an Eze in Afaraukwu, Umuahia, the state capital of Abia.

In June, he was re-arrested in Kenya and deported to Nigeria to face his charges.

Why IPOB is not a terrorist organisation – Lawyer 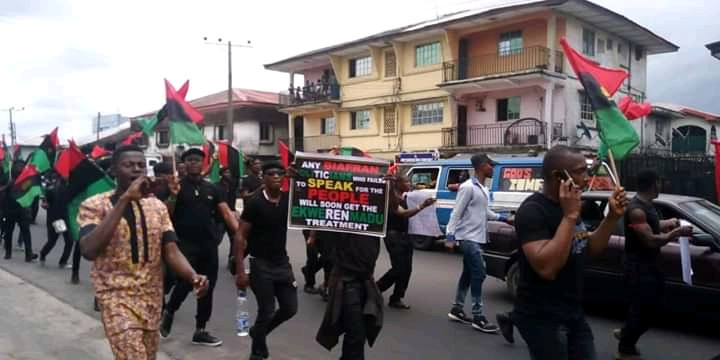 The Indigenous People of Biafra, also known as IPOB, have named Mazi Chika Edoziem as their new leader. IPOB declared that Edoziem would oversee its operations until the release of its leader, Nnamdi Kanu. According to a statement made by the group’s spokesperson, Emma Powerful, Edoziem will hand over leadership to Kanu after his release. The statement […]

IPOB: They Would Have Cut Off My Head And Played It To Play Football – Joe Igbokwe

Joe Igbokwe has stated on his second Facebook page (Agbalanze Nnewi) that if the suspected members of the deadly Indigenous People of Biafra (IPOB) who set fire to his Nnewi Home (House of David) a few months ago had met him at home on the day they committed the crime, they would have cut off […]