The control of the Ekiti State chapter of the Peoples Democratic Party (PDP) may have slipped off the hands of former Governor Ayodele Fayose, as a close ally of Senator Biodun Olujimi, Alaba Agboola has taken over as the substantive chairman of the party in the state. Read more

2. Ex-NHIS chief, Yusuf, tackles US senators over move to blacklist Nigeria for alleged persecution of Christians

A former Executive Secretary of the National Health Insurance Scheme, Prof. Usman Yusuf, on Monday disagreed with the United States Senators on the reported persecution of Christians in Nigeria. Read more

Security agents took over the Bauchi State House of Assembly complex as the leadership crisis rocking the parliament escalated on Monday. Read more

The Special Adviser to the Lagos State Governor on Drainage and Water Resources, Joe Igbokwe, has told leaders in the South-East to forget the idea of producing a President in 2023 and rather choose between achieving a Biafra Republic, or aspiring to get the position of a Secretary to the Government of the Federation (SGF) or the Senate President. Read more

Investors in the Nigerian capital market on Monday lost N20.60 billion following the dip in equity capitalization by -0.07 percent at the close of the day’s business. Read more

Nigerian banks’ total assets rose by N11.15 trillion in one year to N64.32tn as of the end of April. Read more

The Lagos State government on Monday ordered the closure of Redeemer’s Nursery and Primary School in Ogba area of the state after a five-year-old pupil drowned in the facility. Read more 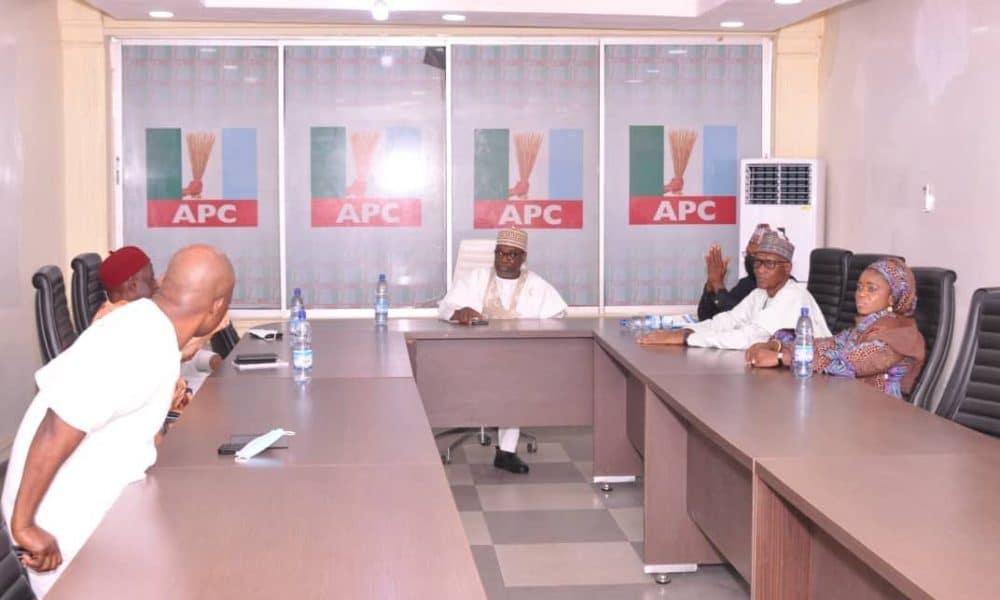 The ruling All Progressives Congress (APC) has concluded plans to vacate a court order stopping its national convention slated for March 26.

Naija News learned that the Attorney General of the Federation and Minister of Justice, Abubakar Malami (SAN) and other party stakeholders had concluded plans to vacate the suit this week.

Recall that Justice Bello Kawu of the Federal High Court Abuja on March 18, 2021, ruled that the APC can not conduct a national convention until a suit brought before it is determined.

The order was made on November 18, 2021, following an ex parte application by an aggrieved member of the party, Hon. Salisu Umoru, seeking to restrain the APC and Chairman of the APC Caretaker/Extraordinary Convention Planning Committee and Governor of Yobe State, Mai Mala Buni, from organising any convention until the determination of the suit.

After reading Umoru’s reliefs, the affidavit by Khalilat Bello and listening to his counsel, H. S. Danjuma Esq, and lawyers to the APC and Buni, A. M. Adoyi, and INEC, Anthony Onyeri Esq, Justice Bello Kawu ruled that the APC can only conduct a national convention after the hearing and determination of the suit.

The presiding judge also ordered an accelerated hearing in the matter.

According to Daily Trust, Umoru (plaintiff) was willing to withdraw the suit for the convention to hold as a planned sequel to intense pressure from APC stakeholders.

This is as the president rejected reports that he approved the appointment of Governor Abubakar Sani-Bello of Niger State.

It was gathered that Buhari has backed Buni to oversee the APC convention scheduled for March 26th with a strict condition that no more postponements would be tolerated.

According to The PUNCH, Buhari took the decision in London after a meeting with his most trusted allies including the Attorney-General of the Federation and Minister of Justice, Abubakar Malami.

Buhari, according to sources, also cleared insinuations and reports that he had backed former Nasarawa State Governor, Senator Adamu Abdullahi for the party’s chairman.

He reportedly stated that he had no preferred candidate for the chairmanship position, throwing the race open.

The Founder of the Eternity Network International (ENI), Apostle Joshua Selman Nimmak has revealed a message he claimed to have received from God concerning ‘money ritual’ in Nigeria. The was disclosed in a video by a popular YouTube handle hours ago. The Apostle on his message, revealed the implication of money ritual and other fetish […]