Grammy award winner, Damini Ogulu who is better known as Burna Boy has explained why he is not actively involved in politics.

Burna Boy, who just released his sixth album ‘Love Damini’, in a podcast with Zane Lowe on Apple Music 1, said he is not naturally drawn to politics.

The singer stated that he has decided not to be involved in politics and its many trickeries, to the point of turning down mouth-watering offers greater men wouldn’t have resisted.

According to the “Last last” crooner, he has no faith in anyone attempting to play God, because there is a real God.

He noted that he has stayed away and does not expect anything from politicians while sticking firmly to his craft.

“I’ve turned down things that even greater men than me could not turn down. Because I don’t want any involvement in politics and trickery. And I’ve always made my stance clear where all of that is concerned, so as you know, the reason for surprise.

Read also: Burna Boy says his music is not Afrobeat

“It’s like drinking water. It’s natural for me. I can only speak for now because I don’t know what’s going to happen tomorrow as regards to the world, and who may come into the picture.”

“I can’t really say, but I can speak for today. As of today, I don’t believe that there’s anybody that’s qualified enough to play God.

“It is not something that I blame anyone for. Because at the end of the day, there is God. So that’s who we should be looking up to. Everything else is going to be flawed.

“So for me, that is why I stick to music, and I don’t really… At this point, I feel like I’ve seen all there is to see about the realities and everything.”

Former Big Brother Naija housemate, Angel Smith has explained in a recent interview with media personality, Taymesan that she regrets participating in the popular reality show. Smith was a contestant in the 6th edition of BBNaija in 2021 where she finished as the third runner-up. Speaking on Taymesan’s Tea With Tay Podcast, the reality star […] 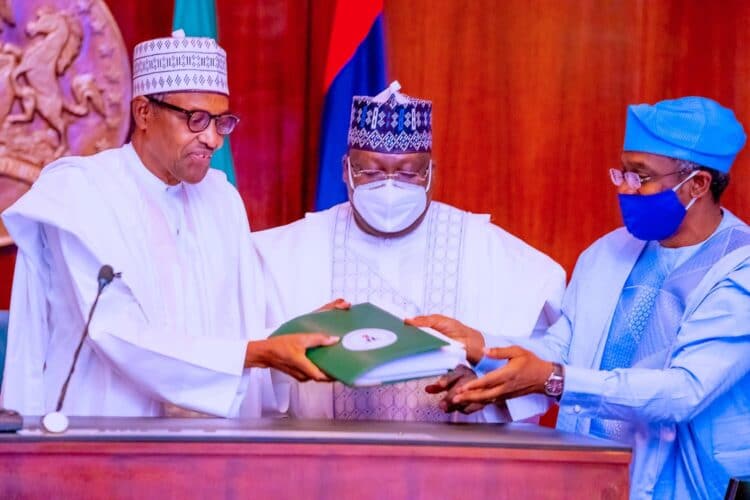 The Minister of Justice and Attorney-General of the Federation, Abubakar Malami, the Minister of Transportation, Rotimi Amaechi and the Minister of Labour and Employment, Chris Ngige are in a tight corner following the rejection of the Electoral Act Amendment Bill by the Senate on Wednesday.

The ministers would be hindered from participating in the All Progressives Congress primaries expect they resign from their appointment before May.

The bill, however, does not stop governors, deputy governors, Vice-President and members of the National Assembly from contesting in the primaries of their political.

Recall that President Muhammadu Buhari after signing the bill into law in February called on the National Assembly to amend Section 84 of the Electoral Act.

President Buhari in a plea forwarded to the National Assembly had argued that it was at variance with the constitution.

Section 84 of the electoral act stops political appointees from contesting in primaries, voting at any convention.

Section 84(10) of the Act specifically reads, “No political appointee at any level shall be a voting delegate or be voted for at the convention or congress of any political party for the purpose of the nomination of candidates for any election.”

In the case where a political party allows political appointees to contest in party primaries, the politician would not be recognised in the election.

The Senate on Wednesday despite the ruling of a court stopping it from reviewing the bill rejected President Buhari’s request to amend the electoral act.

Lawmakers on Wednesday rejected the bill despite an attempt by Senate President, Ahmad Lawan to put the motion for its adoption for a second reading to a voice vote.

Senator Adamu Aliero had charged the Senate to step down the amendment of the Electoral Act after the Majority Leader, Yahaya Abdullahi, moved the motion for the bill to be read a second time.

Aliero in his stand made reference to the provision of Rule 52(5) of the Standing Orders of the Senate.

Order 52(5) provides that, ‘Reference shall not be made to any matter on which a judicial decision is pending, in such a way as might in the opinion of the President of the Senate prejudice the interest of parties thereto.’

He advised lawmakers to step down the bill pending the vacation of the ruling by a Federal High Court in Abuja on Monday.

According to Aliero, amending the Electoral Act would be sub judice.

The Senate President while ruling on Aliero’s motion claimed that the decision of Senators to amend the Act is to exercise the constitutional duties of the legislature.

The Minority Leader, Enyinnaya Abaribe on his part opposed the proposed deletion of Section 84(12) of the Act.

Abaribe said, “There are certain things that we see which we think we don’t even have to come here to debate. One of those things is the fact that in every democracy, all over the world, there are certain rules which we don’t need to be told about. One of those rules is the fact that you cannot be a referee and a player on the same field. It is either you’re a referee or a player.”

Senator Smart Adeyemi while speaking on the move to amend the bill said, “Indeed, it is a settled matter in law that you cannot be a judge over your own case.

“In any election, where people have the added advantage of holding executive power, either by proxy or directly or by appointment, for such people to have access and compete with others who came from the street, I think is an unjust society.

“Therefore, I disagree with all the arguments on the need to consider a decision that has already been settled.”

Senators, however, voted against the bill despite the effort by the Deputy President of the Senate, Ovie Omo-Agege, to sway the opinion of the lawmakers.

Hon. Mudashiru Obasa, the Speaker of the Lagos State House of Assembly, in a congratulatory message has described the general overseer of the Redeemed Christian Church of God (RCCG) Pastor Enoch Adeboye as a man divinely chosen by God to lead the Church. Obasa on Tuesday, in a press statement appreciated Pastor Adeboye for his […]