Ikhide Ikheoa, a former classmate of Governor Ifeanyi Okowa of Delta State, has opened up on the controversy surrounding the school certificate of the vice-presidential candidate of the Peoples Democratic Party (PDP).

In a post shared on his Facebook page on Tuesday, Ikhide disclosed that the governor was his classmate from 1974-1976 (HSC) at Edo College, Benin City. The Nigerian author asserted that Governor Okowa was one of the smartest, decent and caring students during their set at the college. According to Ikhide, the Delta governor passed his A levels with flying colours and went on to study medicine at the University of Ibadan (UI) and became a medical doctor. Ikhide added that Okowa was also a classmate of the current Director-general of the Nigerian Institute of International Affairs (NIIA), Professor Eghosa Osaghae. He wrote: “Dr. Arthur Okowa was my classmate at Edo College (1974-1976 HSC). In a very competitive class he was one of the smartest. He passed his A levels with flying colours and went on to become a medical doctor. I found my 1974 WASCE result the other day, I was surprised to see it! “You can verify Arthur’s pedigree with another classmate and my bosom friend Professor Eghosa Osaghae, great political scientist and current Director-general of NIIA. We were at Edo College together and they both attended UI (University of Ibadan). “Decades ago, Nigerians had many scholars for leaders. It’s been almost 50 years but I remember Arthur as a smart, decent, caring soul. Certificates are largely ceremonial; in four decades in the US, I’ve never had to show anyone my certificates. That’s what transcripts are for.” “PS: Arthur was very smart. I was always first in class, and he would come a distant second. I am a genius. What??? Ask him!” added Ikhide. 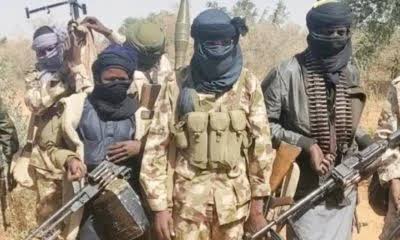 Wives Of 19 soldiers killed in an ambush by bandit terrorists during an attack on the convoy of the Deputy Governor of Kebbi State, Samaila Dabai, have protested the unfortunate incident.

In a video posted on Twitter by ZagazOlaMakama, the late soldiers wives and some sympathisers had stormed the house of the Commanding Officer of the 223 Batallion.

Naija News had reported that Dabai’s convoy was attacked on Wednesday in Kanya, Waje District of Danko/Wasagu Local Government Area of the state.

The deputy governor was said to be visiting some areas in the state affected by bandits activities when his convoy ran into a large number of bandits operating in Kanya community.

This prompted Dabai and some soldiers in his convoy to attempt to save the villagers from the bandits but a gun battle ensued in the process.

One of the security aides attached to the deputy governor, ASP Idris Libata, alongside 18 soldiers were killed during the gun battle while the bandits escaped with injuries and wounds.

In an interview with Channels Television, Dabai said the bandits were looting shops, houses, and rustling cattle in the area when he arrived in the village.

Dabai said he advised his security team to pursue the bandits out of the community so that they could pull them along and separate them from the villagers.

He, however, commended the brave efforts of the 223 Battalion and vigilante groups in repelling the attack, which could have been more deadly.

The deputy governor said the criminals had stormed the area with high-grade weapons and mingled with villagers in order to hide their identities.

The Biafra movement leader, Nnamdi Kanu has surrendered all forms of violence to allow peace to reign in the south-Eastern region of Nigeria. Kanu trial has been an epic one, filled with so much dramas and situations. From being illegally arrested in Kenya, to being locked up, dehumanized, beaten and tortured by the Department Of […]

The Abuja Zonal Command of the Economic and Financial Crimes Commission (EFCC) on Tuesday June 21, 2022, arraigned one Kayode Raphael Odeyemi, a 62-year-old retired Deputy Comptroller of Corrections, before Justice M.A. Madugu of the FCT High Court, Bwari Abuja on a two count charge for offences bordering on land fraud. Count one of the […]