The Yobe North senatorial candidate of the All Progressives Congress (APC) Bashir Machina, has raised an alarm that some members of the party plan to forge his signature on a letter, stating his voluntary withdrawal for Senate President Ahmad Lawan.

The allegation was contained in a statement by Machina’s campaign organisation, signed by its spokesperson, Husaini Isah on Tuesday.

While the Independent National Electoral Commission (INEC) had confirmed Machina as the APC candidate for the Yobe North Senatorial district, the leadership of the party insisted that Lawan was the candidate.

Meanwhile, the Machina campaign organization stated that some members of the APC, whom it described as “slaves to corruption and criminality” were behind the plot to manipulate the candidacy of the senatorial district, which was reportedly won by Machina.

Read also:Nigeria’s 40% stake in DisCos should be sold to foreign investors —Ahmed Lawan

The statement read, “Information available to the Bashir Machina Campaign Organisation has it that some individuals have entered an unholy alliance with some compromised leaders to forge the withdrawal letter of Yobe North APC senatorial candidate, Hon Bashir Machina, even after communicating formally to the Party leadership affirming his stand not to step-down for anybody.

“It is sad and indeed unfortunate that after all the cries and alarm raised by the Campaign Organisation exposing a sinister plot to subvert the will of people of Yobe North, some mischievous elements are hell-bent and determined to carry out their criminal offence.

“It has eventually come to light in this untidy business of a forged withdrawal letter, that some compromised leaders have become slaves to corruption and criminality in Nigeria.”

Machina further reiterated his position that he would not step down and any letter of withdrawal received was not from him rather they were forged.

“Facts affirming our earlier accusation that some individuals were trying to forge the withdrawal letter of Bashir Machina have emerged, and as a Campaign Organisation, we want to make it abundantly clear that any withdrawal letter carrying the signature of our candidate is a forged document and does not emanate from him.

“We wonder how a sane person could delve into this embarrassing action which is criminal in nature and has the potential of soiling the reputation of the APC as a party that stands for justice.

“We want to reiterate that Bashir Machina’s letter dated 13th June which was sent to the National Chairman of the APC, Abdullahi Adamu, still stands and any attempt to forge his withdrawal letter would be treated as a pure criminal offence irrespective of the calibre of person(s) involved,” the statement added,

The post Machina raises the alarm over alleged plot by APC to forge his withdrawal for Lawan appeared first on Latest Nigeria News | Top Stories from Ripples Nigeria.

The presidency has justified President Muhammadu Buhari’s decision to go on a trip to Dakar, Senegal, despite the recent terror attack in the country. The president will be heading to Dakar on Wednesday to attend the IDA for Africa Summit. Reacting to the trip Nigerians condemned such a move when the country is still reeling […]

The Kaduna State Governor, Nasir El-Rufai has stated that he prefers someone from the ‘core team’ to take over from him as State Governor in 2023.

Though he denied anointing any particular person, El-Rufai said despite having a personal preference, it’s not solely up to him to choose his successor.

He explained further that he would prefer someone from the ‘core team’ because this represents a group of people who have been working with him since 2014 and understand the plans of policies of government hence, continuity would not be a challenge.

Governor El-Rufai stated that the leadership in Kaduna State will continue to discuss and rub minds with stakeholders to ensure a worthy successor emerges in 2023.

“I’ve not. I’ve not anointed anybody. Stories go round.

“I think the leadership…our first eleven as I called it, the core leadership of Kaduna State would sit and debate this and see whether we can come up with one person we think is a worthy successor and what that person would do to carry the rest of the team together.

“We have our core team. We’ve started meeting regularly and even our senators join from Kaduna. We discuss this regularly and at some point, we’re going to make that decision, but we’ve not anointed anyone.

“Because for me, Kaduna is more important than anything, including myself, friendship and any preferences I may have and I’m human only God knows the best person to succeed me. I’m only human.

“My preference is in our core team, that is the first eleven. I said core team because these are the guys that worked with me since 2014 to organize our party, organized our campaign and we won and got elected.

“So, they know all the policies we formulated and implemented. So, they’ll not come and have about-turn changing direction.

“This is why I said our core team. Some are in the cabinet and some are in the National Assembly, but we have our core team and we’ll keep discussing. The reason I want someone from our team to succeed us is because I want continuity,” he added.

The  All Progressives Congress is currently battling no fewer than 208 court cases with some of them challenging the leadership of the party in various states and the legitimacy of the Caretaker/Extraordinary Convention Planning Committee, The PUNCH has learnt

For the first time since the country returned to democracy in 1999, the Senate yesterday reneged on an agreement it reached with a sitting president as the lawmakers overwhelmingly threw out a bill seeking to amend the new Electoral Act 2022, This Day reports. 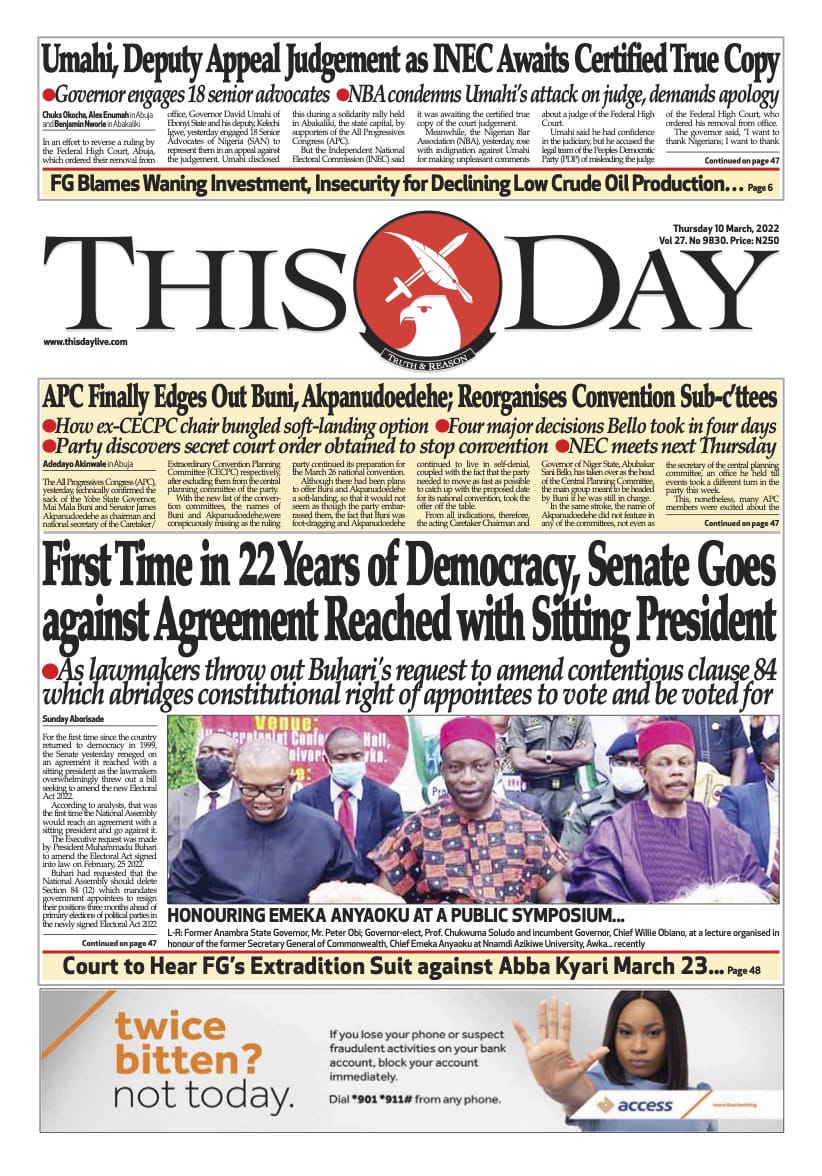 The ousted caretaker chairman of the All Progressives Congress (APC), Mai Mala Buni, is due in London to confer with President Muhammadu Buhari, The Nation learnt last night. 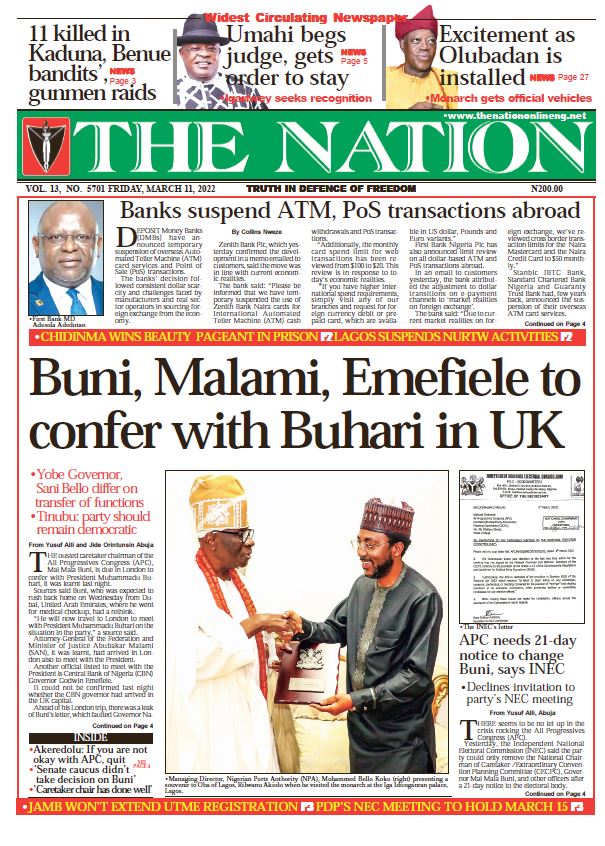 The Independent National Electoral Commission (INEC) has said that it is not aware of leadership change in the ruling All Progressives Congress (APC). Senior officials of the electoral body told Daily Trust on Thursday that this has been communicated to the party in the commission’s response to a letter written to it by the Niger State Governor, Abubakar Sani Bello, who is the acting chairman of the party’s caretaker committee. 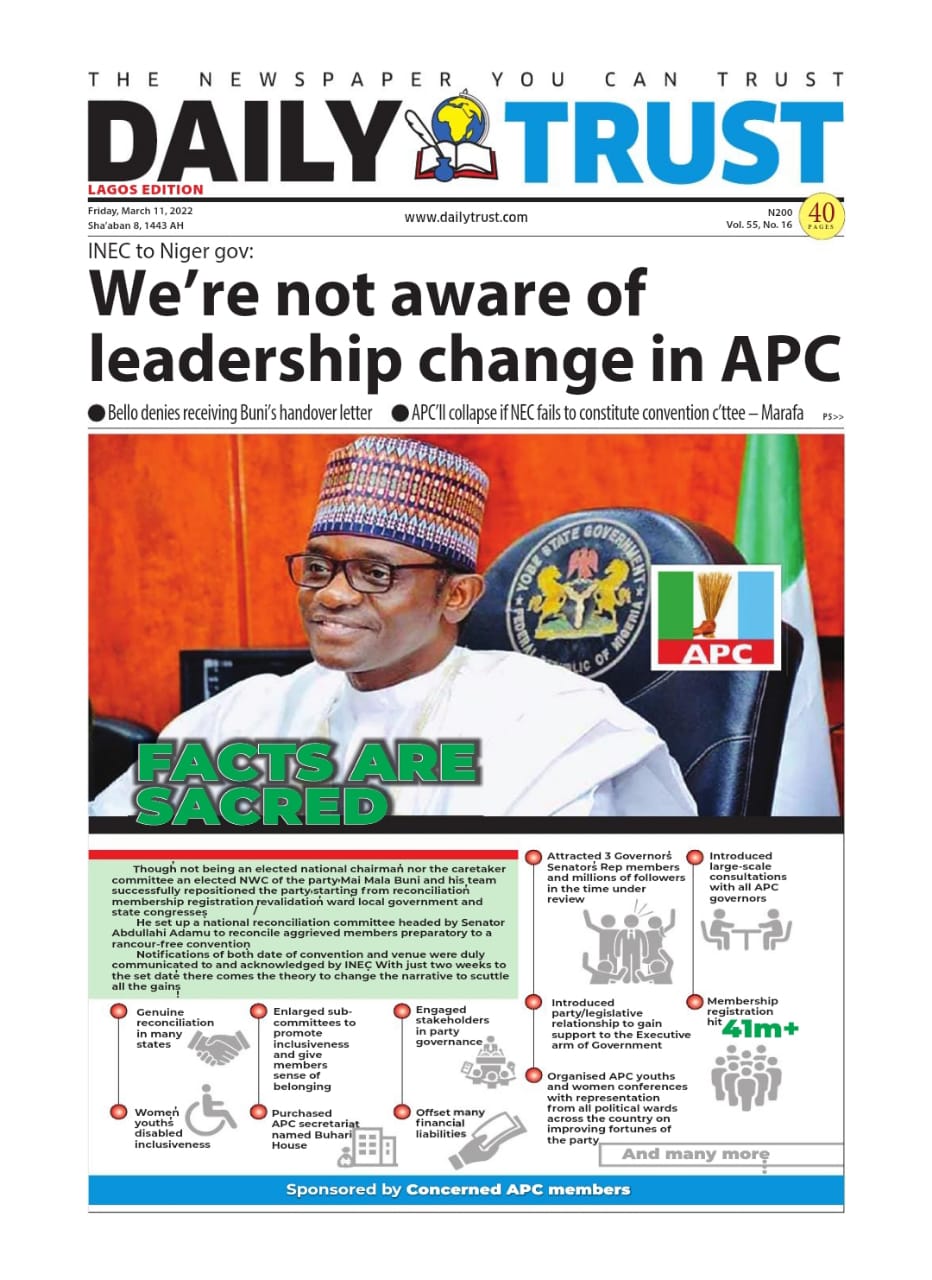 Director-General of Nigeri­an Civil Aviation Authority (NCAA), Captain Musa Nuhu, on Thursday told the House of Representatives that unless ur­gent steps are taken to address the current situation in the aviation industry, the agency might be forced to shut down the nation’s airspace to ensure safety of Nigerian travellers, Independent reports. 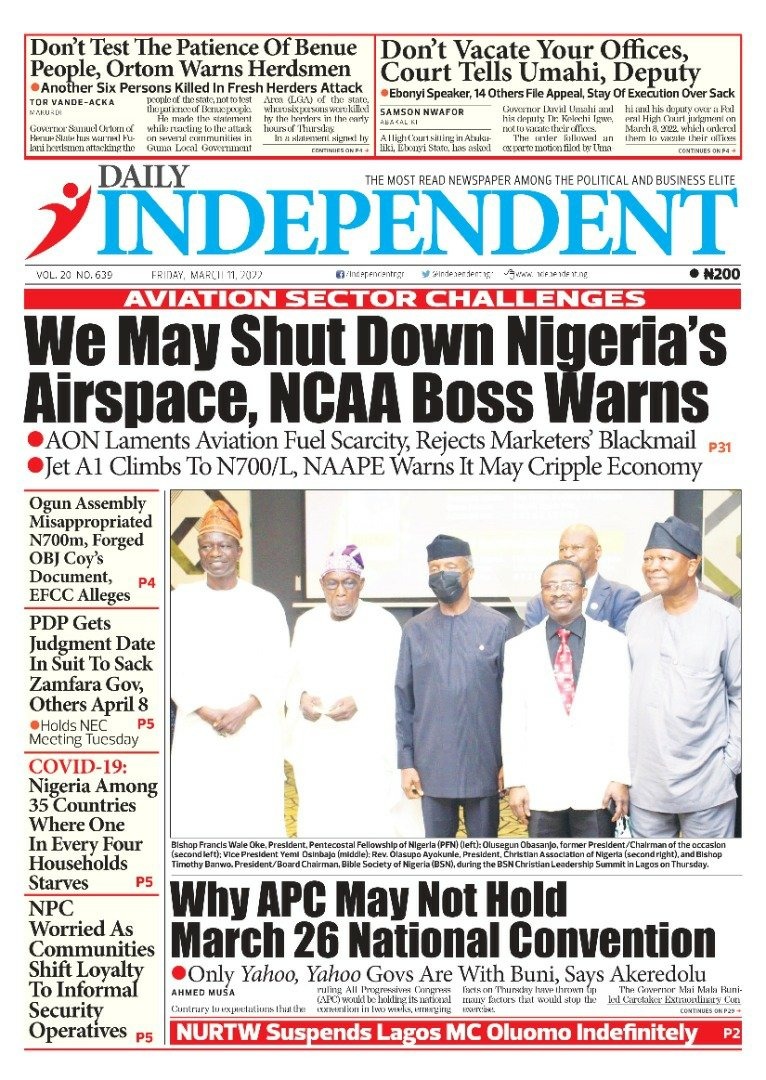