Nigerian music producer and former rapper, JJC Skillz has announced that himself and Nollywood actress, Funke Akindele have ended their union as a married couple.

The former JJC & 419 Squad leader made the announcement during the early hours of today, Thursday, June 30.

“Dear Friends and family, I need to let you know that Funke and I have separated. While it lasted we shared a lot of things together and have created 2 beautiful children. The last two years have been extremely difficult for us. I know I have tried my best to fix things but believe it is beyond repair now.

“3 months ago and at Funkes insistence I moved out of the house and apart from AMVCA have not been able to get Funke to sit down in an amicable manner to discuss the future of our relationship. I’m making this announcement so that the public is clear that we both are pursuing separate lives.

“We still have issues that need to be addressed such as the custody and wellbeing of our children which is paramount as well as business interests which need to be disentangled but I have no doubt that these will be resolved one way or the other.”

The development is coming barely 24 hours after Funke Akindele’s name appeared on the nomination list for the position of Deputy for Lagos PDP governorship candidate.

Should she emerge victorious in her latest endeavor, it would add to her impressive career and transition her into mainstream politics.

A presidential hopeful and member of the Peoples Democratic Party (PDP), Okey Uzoho, has dragged his Party to court for allegedly denying him the opportunity to contest in its May 28th presidential primary. Best News Network reports that in an originating summons marked FCT/CV/144/2022 and filed at the federal capital territory (FCT) high court, Uzoho […]

Power generation on the national grid collapsed to zero megawatts around 10.40am on Monday, leading to widespread blackout across the country. The PUNCH reports that different power distri-bution companies alerted their customers about the grid collapse, stressing that it was what led to the outages. 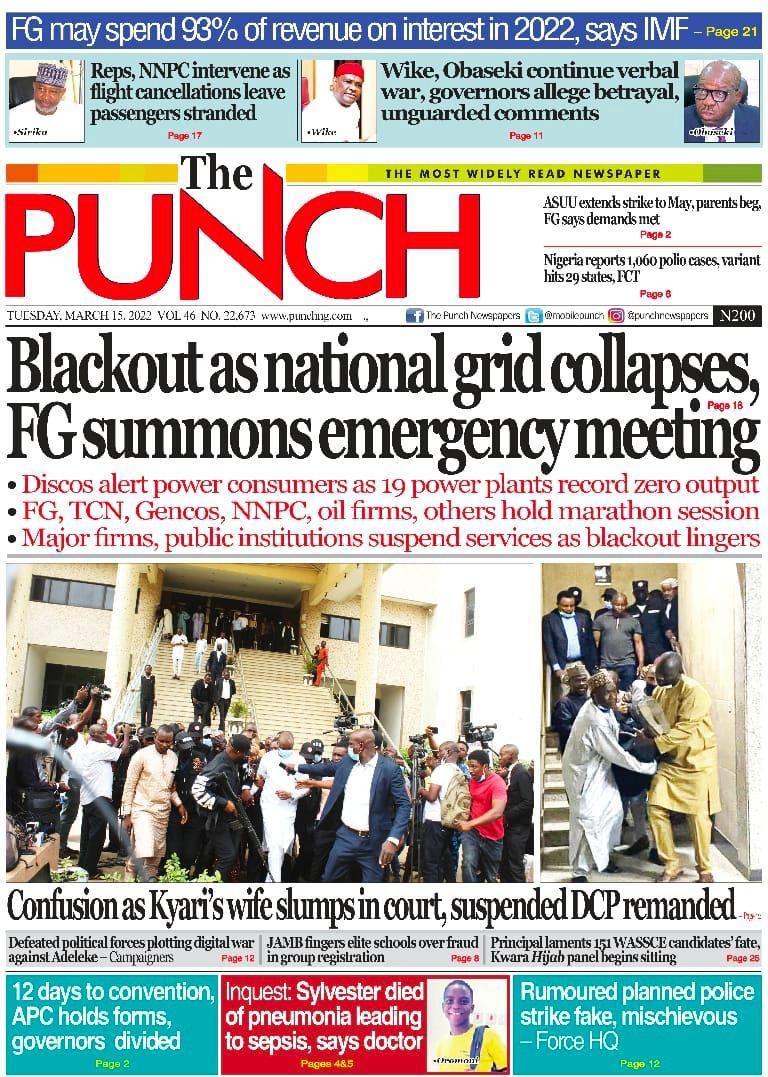 The Central Bank of Nigeria (CBN) has commenced a grand plan to wean deposit money banks (DMBs) off the historical risk and cost of cash management, a new document issued by the regulator has revealed, The Guardian reports. 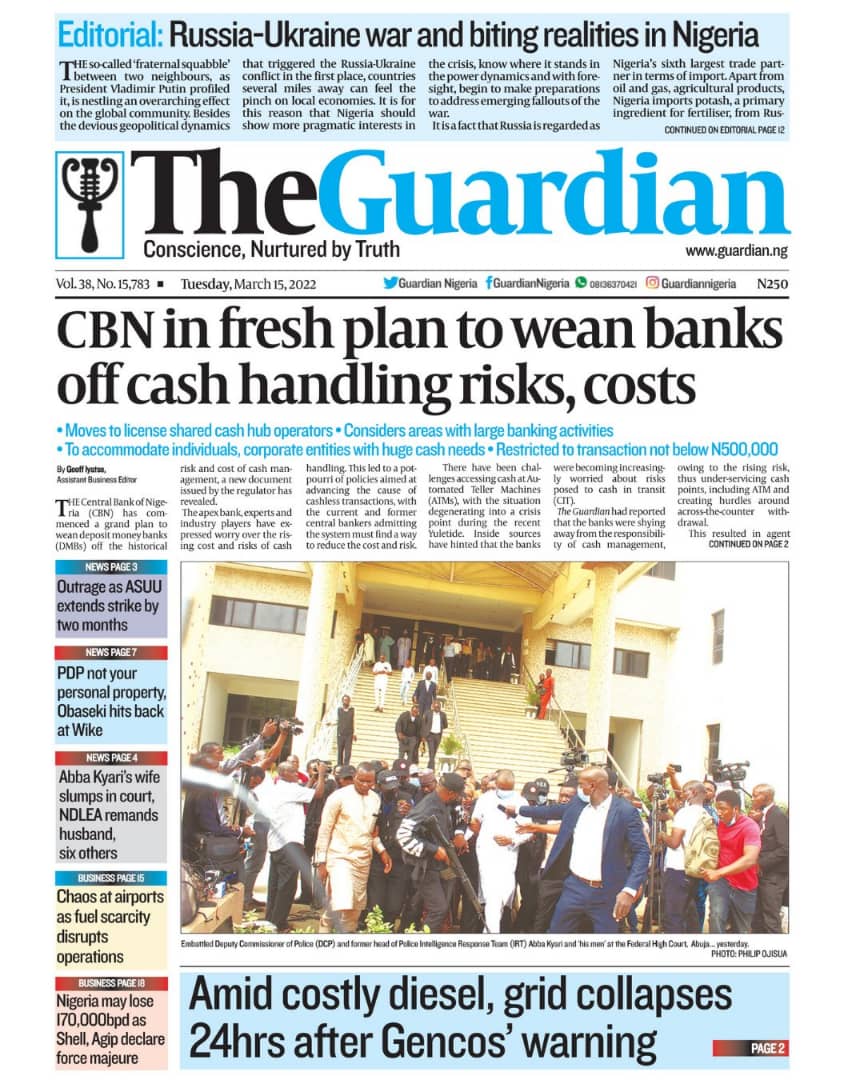 Governor Godwin Obaseki of Edo State and his counterpart in Rivers State, Nyesom Wike, both of the Peoples Democratic Party, PDP, are currently at daggers drawn over purported verbal attacks on the deputy governor of Edo State, Philip Shaibu by the latter for threatening to quit the party if their supporters were not integrated fully into the PDP, Vanguard reports. 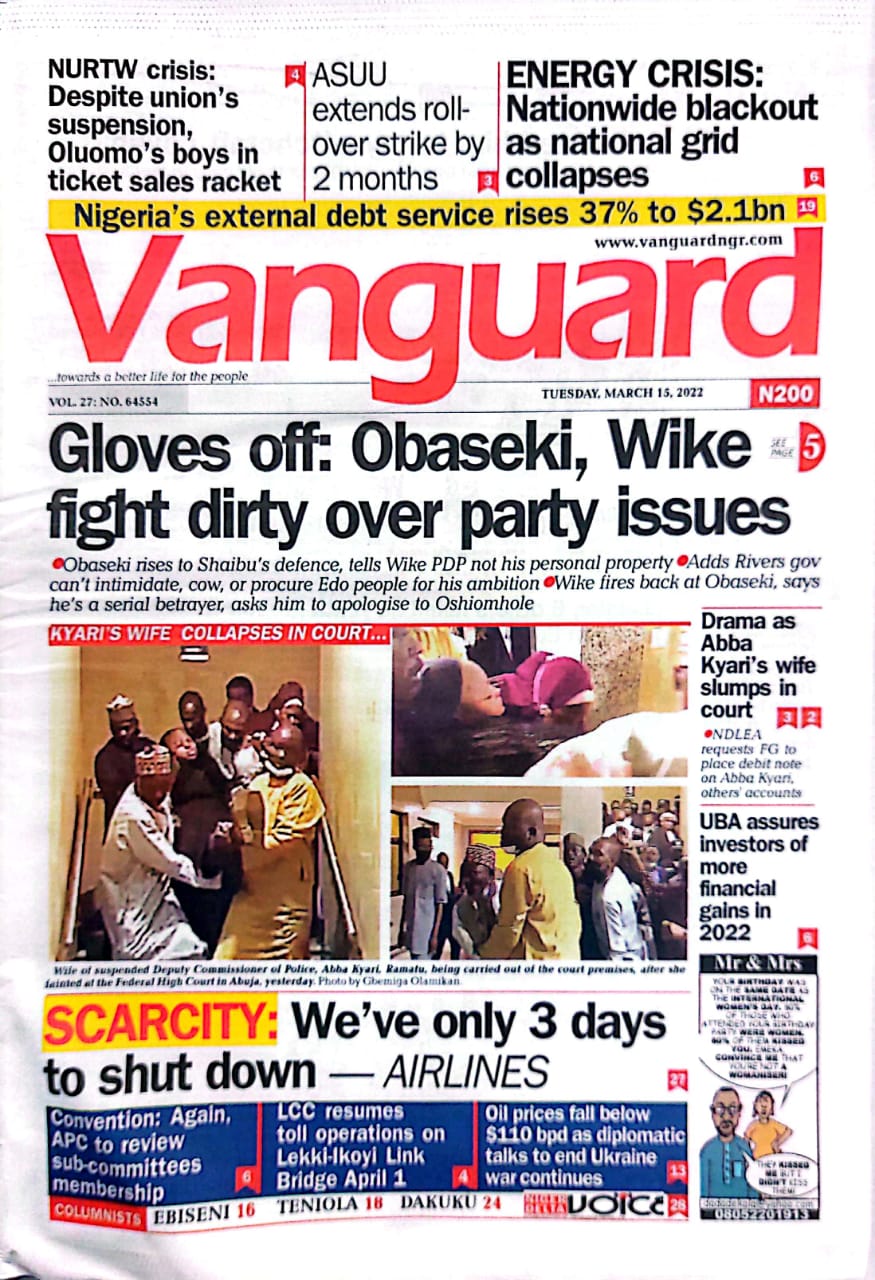 There is anxiety among Peoples Democratic Party (PDP) members over the zoning of the 2023 presidential ticket as organs of the party began a series of meetings last night, The Nation learnt. 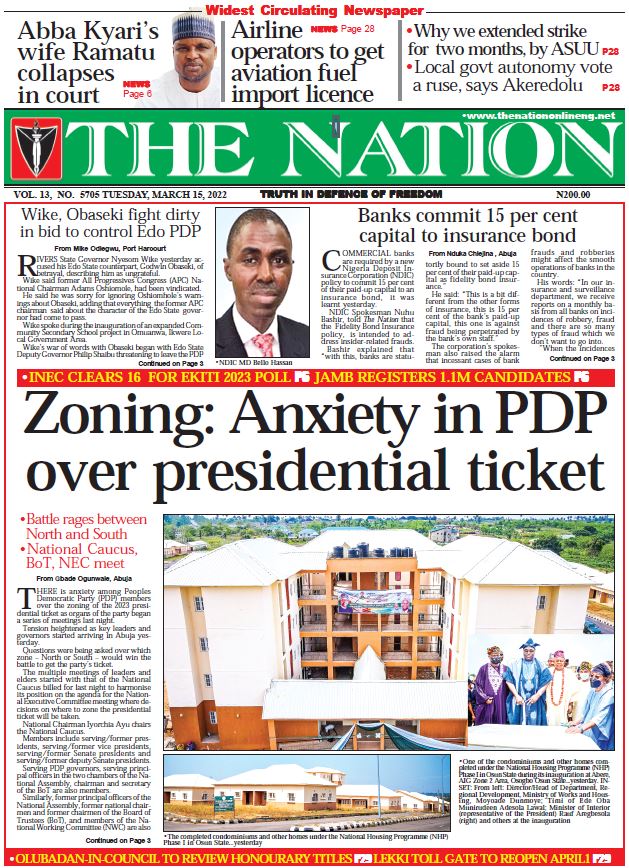 According to Daily Trust, Nigeria’s energy crisis on Monday took a multiple dimension as Agip announced a halt in oil export at its 25,000 barrels per day (bpd) Brass export terminal in Bayelsa 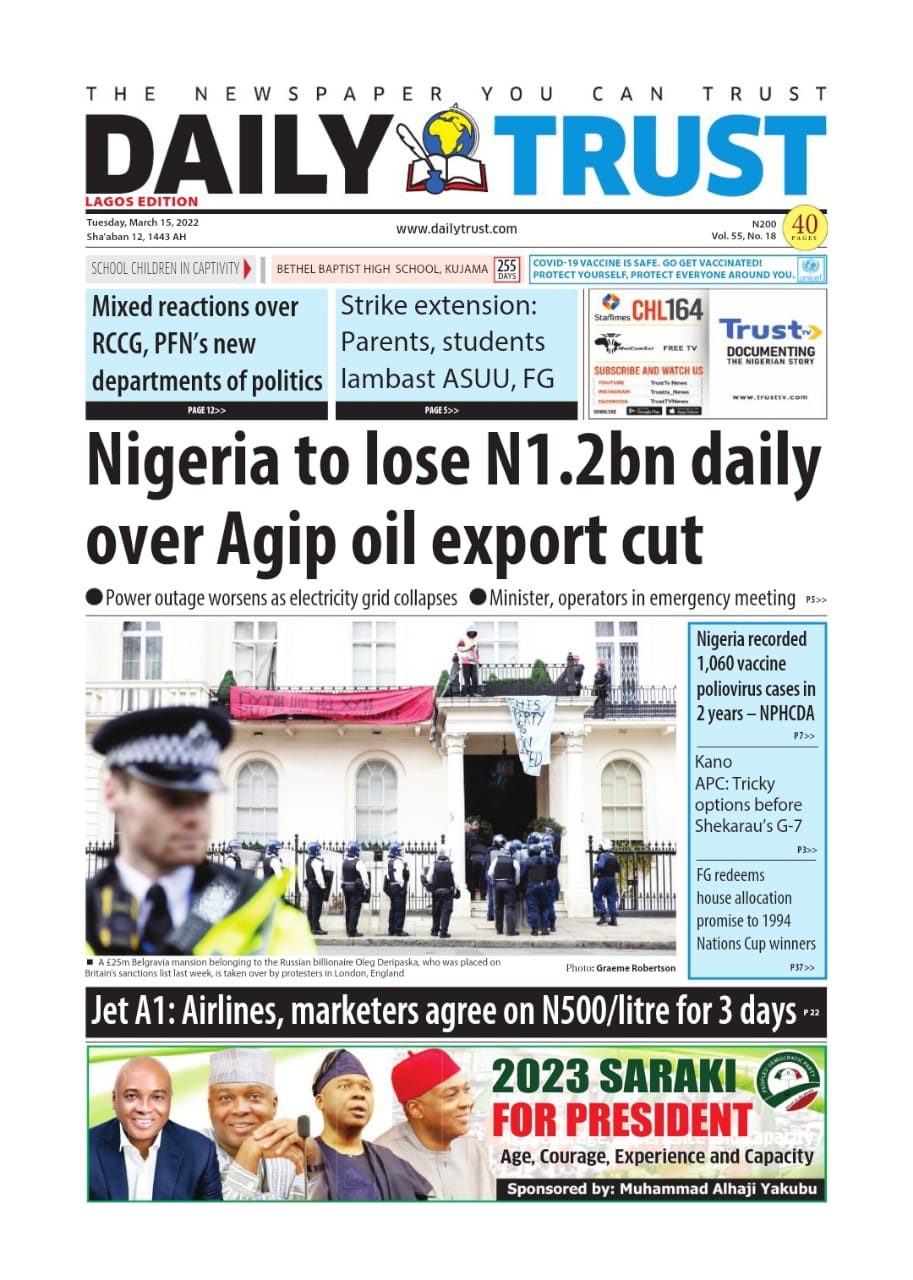 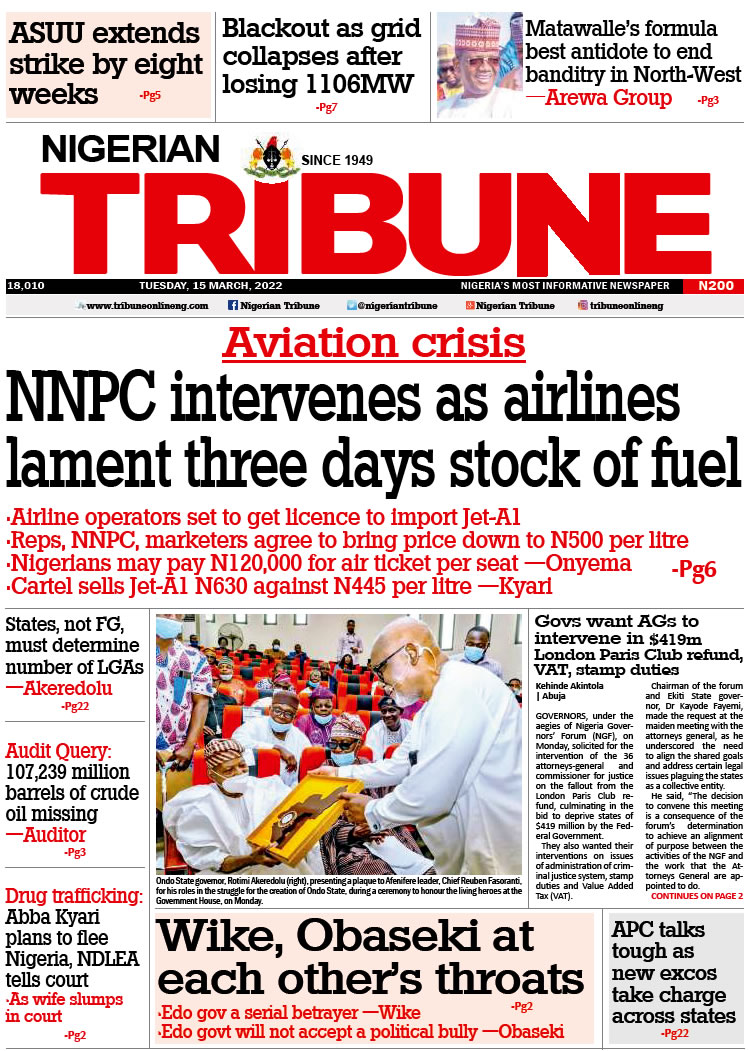 The Chief Executive Officer of Union Bank, Mudassir Amray, has revealed that the lender will go ahead to merge with Titan Trust Bank despite an existing lawsuit by aggrieved shareholders trying to stop the merger. Ripples Nigeria had reported two weeks ago that, lawyers and SANs; Charles Mekwunye and A.M. Makinde, representing their interest as […]