The South East Revival Group (SERG) has commended the spokesman of the Northern Elders Forum (NEF), Hakeem Baba-Ahmed over his comment on the Labour Party (LP) presidential flagbearer, Peter Obi.

Naija News reports that Baba-Ahmed had in a tweet via his official Twitter handle last Friday announced his meeting with the LP Presidential candidate. The NEF spokesman commended the former Anambra State Governor for his zeal to fix the country and asked those who try to sell him will tone down his ethnic identity. Reacting to the development on Tuesday, SERG coordinator, Willy Ezugwu stated that Baba-Ahmed spoke like a patriot and courageous statesman who wants the country to change for the better. He stated that anyone who does not want a change in the country is either a typical politician with a vested interest or an ethnic bigot who should not be taken seriously. Ezugwu said citizens, irrespective of political and religious affiliations, have decided to dump the All Progressives Congress (APC) and the Peoples Democratic Party (PDP). He noted that no patriotic Nigerian can view Obi’s presidential from an ethnic or religious perspective because the candidate is well-loved. Ezugwu said NEF leader, Prof Ango Abdullahi was right when he declared that neither PDP’s Atiku Abubakar nor APC’s Bola Tinubu can fix Nigeria’s challenges. He advised lovers of good governance, rule of law, infrastructure development, national unity, and security of lives and property to turn out in large numbers next year.

Breaking: Many Feared Dead As Tanker Explodes On Lagos-Ibadan Expressway 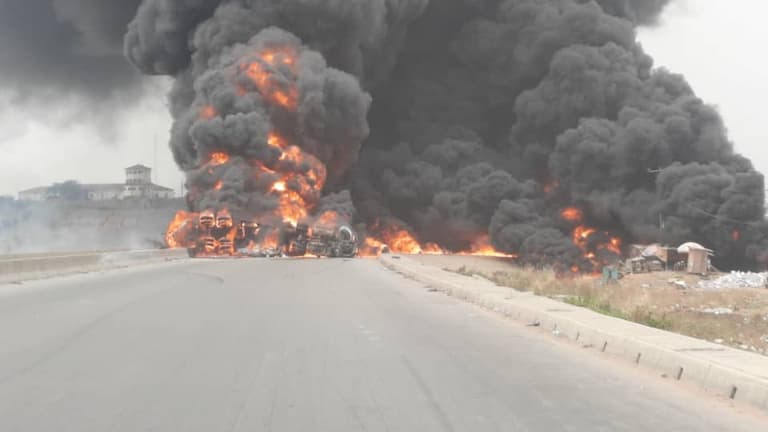 Many passengers have reportedly lost their lives in a multiple crash accident which occurred along the Lagos-Ibadan expressway.

Naija News reports that the accident involved two vehicles and a tanker which went up in flames around the Mountain of Fire and Miracles Ministry (MFM) Prayer City.

She said “A multiple crash involving a Tanker and two other vehicles just occurred around mountain of fire church on the outward section of the LAGOS-IBADAN Expressway.

“There is an outbreak of fire at the scene. Motorists are advised to drive cautiously and remain calm until the fire is extinguished.”

There was bloodbath in three communities of Zamfara State on Saturday when heavily armed bandits struck and killed not less than 48 persons, injured many and set buildings and vehicles ablaze. According to the Sole Administrator of Bakura Local Government Area in the state, Aminu Suleiman, who confirmed the attacks, the affected communities included Sabon […]

Former Presidential aspirant under the All Progressive Congress, APC, Adamu Garba, has been reacting to the unfortunate killing of one Fatima, an Adamawa Woman, who was murdered with her four Children in Anambra. In a series of tweet, Adamu Garba reiterated that Northern leaders have failed their people. According to him, who should be blamed […]