The Igbo Elders Consultative Forum (IECF) said on Friday the people of the South-East would not vote for the All Progressives Congress (APC), and the Peoples Democratic Party (PDP) in the 2023 general elections.

In a statement issued on Friday by its Secretary, Prof. Charles Nwekeaku, the IECF blasted the two parties for refusing to zone the presidency to the South-East.

The group, however, described the delegates from the South-East who did not vote for presidential aspirants from the region in the primaries of both parties as betrayals and saboteurs.

The statement read: “This will not happen again as the Igbo Elders shall provide a new leadership that will strengthen the Ohaneze leadership in Igbo land. Those betrayals will retire from politics shamefully and unceremoniously as they will never represent the South-East in any public service again.

“We observed with grave concern the unprecedented monetisation of the recent political parties’ primary elections, especially the presidential election at which highest bidders emerged as presidential candidates.

“More worrisome was the failure of the major political parties, namely, the ruling APC, and PDP, to zone the presidency to the South-East in keeping with the Federal Character principle and zoning arrangement as contained in Section 14 (3) of the 1999 constitution of the Federal Republic of Nigeria and the various political parties constitutions for the sake of justice, equity, fairness, peace and stability of the country.
“Equally shocking and saddening was the brazen betrayal and unbridled collusion of some unpatriotic Igbo sons and daughters that shamelessly and unrepentantly joined those who do not mean well for our people to deny presidential aspirants from the South-East their support and votes.”

The post Group reveals why South-East will not vote for APC, PDP in 2023 appeared first on Latest Nigeria News | Top Stories from Ripples Nigeria.

Hello, and welcome to Business Roundup this week. Here, we bring you highlights of events that happened during the week -from the capital market to the mainstream business activities, while not forgetting the tech/economy build up. Here are the Headlines: • OPEC raises Nigeria’s production quota for July to 1.799mbpd • Headache for Nigeria as […]

SocialMediaTrends: How Nigerians reacted to manhandling of captives by terrorists

Nigerians on social media have expressed displeasure with content of a fresh video released by terrorists on Sunday morning. The gory video showed how the terrorists were mercilessly beating their captives. Local sources said that the captives were the abducted passengers on an attacked Kaduna-bound train from Abuja on March 28. The video further irked […]

The post SocialMediaTrends: How Nigerians reacted to manhandling of captives by terrorists appeared first on Latest Nigeria News | Top Stories from Ripples Nigeria. 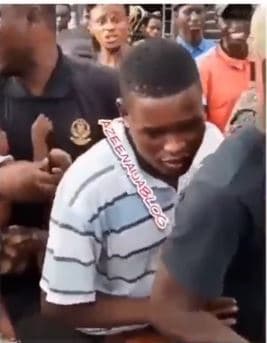 A video on social media showed a yet-to-be-identified rider being beaten by the angry mob after a child was found inside the courier.

Naija News learnt that the incident happened in Sangotedo in the early hours of Saturday, 12 March.

However, details on the development were sketchy as at press time.

In the video that surfaced on social media, the dispatch rider could be seen beaten by the angry mob who found the child inside the box.

He was later seen sandwiched between an okada rider and a man carrying the baby, and was being driven to a nearby police station.

This incident is coming barely a week after,  a 22-year-old fashion designer,  Bamise, was gruesomely murder after boarding BRT vehicle in Lagos.