President Muhammadu Buhari on Friday vowed to deal with terrorists causing breaking down of law and order in the South-East and Nigeria in general.

The President, who stated this during his two-day visit to Ebonyi State, decried the deteriorating security situation in Nigeria.

He stressed that terrorists would longer be allowed to kill innocent Nigerians and threaten national peace.

He, therefore, directed security operatives to go after terrorists in earnest and flush them out from their hideouts.

Buhari said: “No one has the right to carry AK-47, and anyone seen in any part of the country doing so and isn’t a law enforcement officer is a threat to our peaceful coexistence and should be treated as such.

“I must register my deep and grave concern with regards to the deteriorating state of security affairs in this region.

See also  2023: We Will Reject Any Plan To Deny Igbo Presidency – Ohanaeze

“In the last 48 hours, I have been informed of the latest in the round of brutal actions carried out by gun-wielding terrorists, who prey on innocent and hard-working Nigerians. Unfortunately, these barbaric acts were visited upon those who have committed their lives to protect their fellow citizens.” 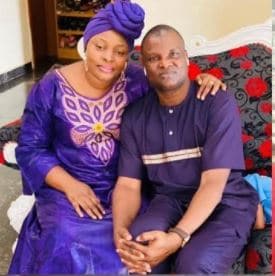 Nigerians on social media have reacted after the wife of the embattled former commander of the Intelligence Response Team (IRT), Abba Kyari, fainted inside the court.

In the video that was shared on social media, she reportedly slumped on the ground shortly after trial judge, Justice Emeka Nwite deferred ruling on applications that Kyari and six other persons facing drug trafficking charges filed to be released on bail pending the determination of the case against them.

The lady, who wore a black Hijab, fell on the floor while armed operatives of the National Drug Law Enforcement Agency, NDLEA, were leading Kyari and the others away from the court premises.

Following the development, Nigerians have taken to Instagram to express their views regarding the wife of the embattled super cop in court.

See some of the reactions below:

chiblue0202 wrote; ‘When she wakes up they should continue sha….. your husband dealt with people … he should be judged too’

One grubskitchen wrote; ‘Is it the money she has been enjoying that shocked her or the atrocities/killing her husband has been committing all these years? Jokers Aunty wake up, It’s time to face the music’

One realwhite_wave wrote; ‘when she was enjoying the money she no slump mtsheww’

One iam_mcdee wrote; ‘Fainting is the easiest thing in Nigerian court….’

One kaima882 wrote; ‘She got half a percent of what her husband has been doing to other women for years and she slumped, now Mr Kyari imagine the number of women you’ve put in this condition and some already lost hope of having they husbands back again, Karma is real.’

One ms_dera wote; ‘You never start . This is just the beginning’

For the fourth time this year, Nigeria again failed to meet the oil production quota allocated to member countries by the Organisation of Petroleum Exporting Countries (OPEC) in April. In a report released by OPEC on Monday, the oil cartel said Nigeria produced 1 .39 million barrels per day as against the expected 1.735 mb/d. […]