President Muhammadu Buhari, on Thursday at a Federal High Court sitting in Abuja, denied ordering the Senate to remove the contentious Section 84 (12) from the amended Electoral Act 2022.

The President’s denial which was contained in a counter affidavit filed on his behalf by the Attorney General of the Federation and Minister of Justice, Abubakar Malami, (SAN), in response to a suit filed by the Peoples Democratic Party (PDP), against him and 12 others, noted that he only expressed reservations and concerns in respect of the aspect of the Act.

In the joint counter affidavit signed by Buhari and Malami to dismiss the PDP’s claims in the suit, the AGF explained that the President, on February 25, “gave a proper, full and unconditional assent to the amended Electoral Act with the particular section 84 (12) which reads:

“No political appointee at any level shall be a voting delegate or be voted for at the convention or congress of any political party for the purpose of the nomination of candidates for any election.”

In the counter suit, Buhari averred that the claims of PDP in its suit against him and the Federal Government on the Electoral Act were “totally false and replete with gross untruths aimed at misleading the court to give judgment against them.”

“The first defendant (President Buhari) assented to the Electoral Bill but did not give conditions or directives to the National Assembly in the manner erroneously deposed to by the plaintiff (PDP),” the counter affidavit said.

“At no time did the first defendant give any directive to the management or leadership of the National Assembly as regards the removal of section 84 (12) of the Electoral Act 2022 from the Act.

“On March 8, 2022, the first defendant officially wrote the Senate President and House of Representatives Speaker to express his concerns about Section 84 (12) of the Electoral Act and formally requested for amendment to be effected on the section so as to eliminate area of infraction with the Constitution.

“I am aware that the National Assembly neither accepted nor acted on the opinion or suggestion of President Buhari,” it added.

The AGF added that only the Court of Appeal can restore Section 84 (12) into the Electoral Act, 2022, insisting that the PDP only challenged the legality or otherwise of the National Assembly tinkering with the Electoral Act, after it had been signed into law by President Buhari.

Nigerian popular author and former politician, Reno Omokri took to social media just a few minutes ago to correct a notion people have been nurturing concerning voter numbers from the southeast geopolitical zone. Taking to his official Twitter handle, Reno Omokri said that many people think that the south east has a low voter numbers […] 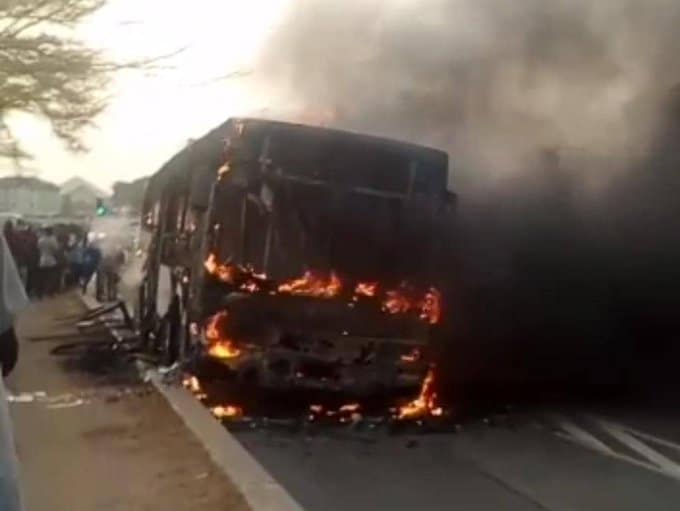 One of the Bus Rapid Transit (BRT) buses operating in Lagos State caught fire on Friday and was totally burnt down.

Naija News understands the incident happened at the Agric, Ikorodu BRT terminal, in the Ikorodu area of Lagos State.

The incident led to a gathering of people who stood by the roadsides and watched from a safe distance as the bus burnt.

It was not immediately clear what led to the fire incident but it was gathered that it wasn’t an attack.

Watch the video below.

Meanwhile, the development is coming at a time when Nigerians are still reeling from the BRT incident in which 22-year-old Oluwabamise Ayanwole was gruesomely murdered.

It will be recalled that Bamise had on February 26, 2022, boarded a BRT vehicle at Chevron Bus Stop, Lekki, heading for Oshodi but she didn’t get to her destination as the driver and some suspected accomplices murdered the young fashion designer.

In a follow-up on the case, Naija News earlier reported that a Yaba Magistrate Court in Lagos State has remanded the driver of the said bus, Mr Nice (Andrew) Omininikoron for 30 days.

The Chief Magistrate, O.A. Salawu who gave the order during a court appearance on Friday, stated that the suspect be held in police custody following the legal advice from the Lagos State Directorate of Public Prosecution (DPP).

Salawu then adjourned the case until April 11 for DPP advice.

Reports coming out of Israeli this morning suggest that police have raided the Al-Aqsa Mosque in occupied East Jerusalem, with at least 67 Palestinians injured in the violence that followed before dawn on Friday. According to the Islamic endowment that runs the site, Israeli invaded the mosque before dawn, as thousands of worshippers gathered for […]