Reno Omokri former presidential aide of Goodluck Jonathan has advised the Redeemed Christian Church of God, RCCG against promoting the Vice President, Yemi Osinbajo ahead of the 2023 elections.

Omokri made the call in response to comments from Head of Politics and Governance of RCCG, Pastor Timothy Olaniyan, claiming that the Vice President is the best aspirant to succeed President Muhammadu Buhari. Omokri noted via a post on his Facebook page that while it was acceptable to pray for Osinbajo as he embarked on his journey it was not necessary to campaign for him. He urged the General Overseer, Pastor E. A. Adeboye to call his members to order. According to him: “‪It is very dangerous for the Redeemed Christian Church of God to politically promote Osinbajo. Churches are meant to promote Christ. If churches and mosques start promoting candidates, then, they are no longer religious organisations and should start paying tax!‬ “It is alright for the candidates to visit the church and Pastor Adeboye for prayers and his blessings. But when the Redeemed Christian Church of God sets up a politics directorate, and the head of that unit starts openly campaigning for Osinbajo, in his official capacity, then things are falling apart! “‪GO Adeboye should call RCCG’s political directorate to order before they start what they can’t finish!”‬

The Peoples Democratic Party (PDP) has mocked the All Progressives Congres (APC) over the recent comments by the Minister of Transportation, Rotimi Amaechi and Governor Nasir El-Rufai of Kaduna State, on the recent Kaduna train attack. Recall that Amaechi had accused his colleagues of not granting approval for the N3 billion security equipment that should […]

State governments are set to sink deeper into financial crises as the Nigerian National Petroleum Company (NNPC) Limited has again informed them a deduction of N328 billion will be made on its monthly contribution to the federal account for April 2022. The development means a lower amount to be shared by FG, states and LGs […]

The Yobe State Governor and Chairman of the All Progressives Congress Caretaker Extra-Ordinary Convention Planning Committee, Mai Mala Buni, may supervise the party’s national convention on March 26. The PUNCH learnt on Sunday that the President, Major General Muhammadu Buhari (retd.), had directed that Buni should head the party’s convention with a strict condition that no more postponements would be tolerated. 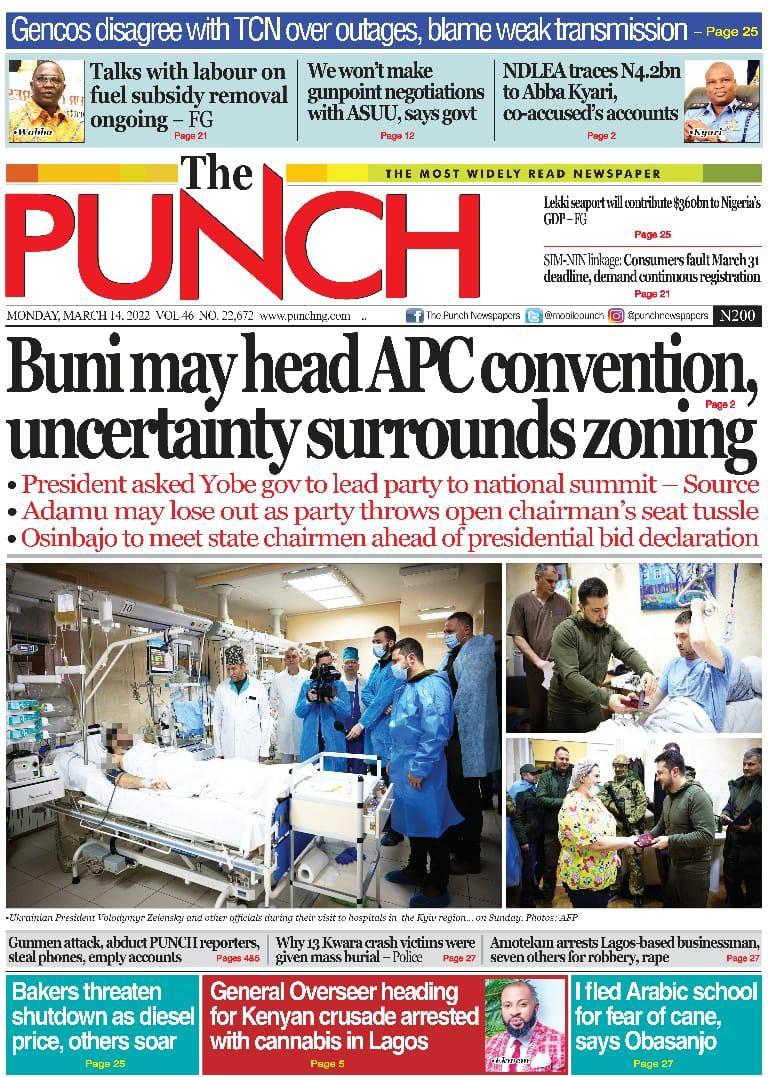 In a dramatic turn of events, leaders of the ruling All Progressives Congress (APC) may have  agreed to keep Yobe State Governor Mai Mala Buni as Interim Chairman of the party’s Caretaker/Extraordinary Convention Planning Committee (CECPC), while Niger State Governor Sani Bello functions as de facto chairman,  though in acting capacity while Buni remains away, This Day reports. 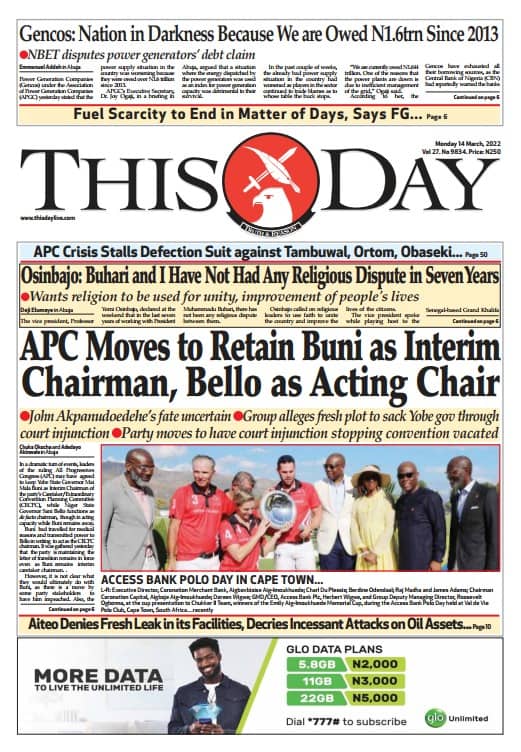 President Muhammadu Buhari may be weighing options on his choice of Senator Abdullahi Adamu as his preferred candidate for All Progressives Congress (APC) national chairman, The Nation learnt at the weekend 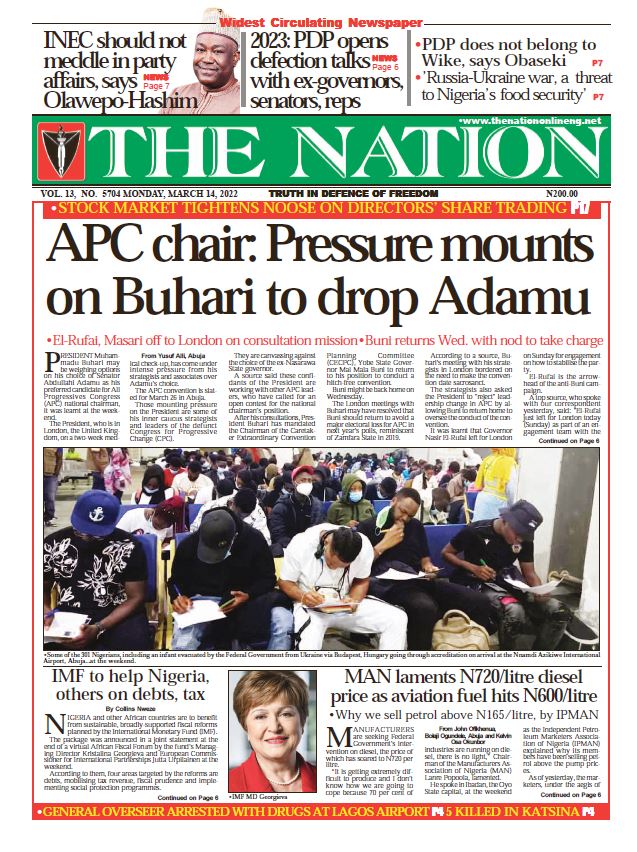 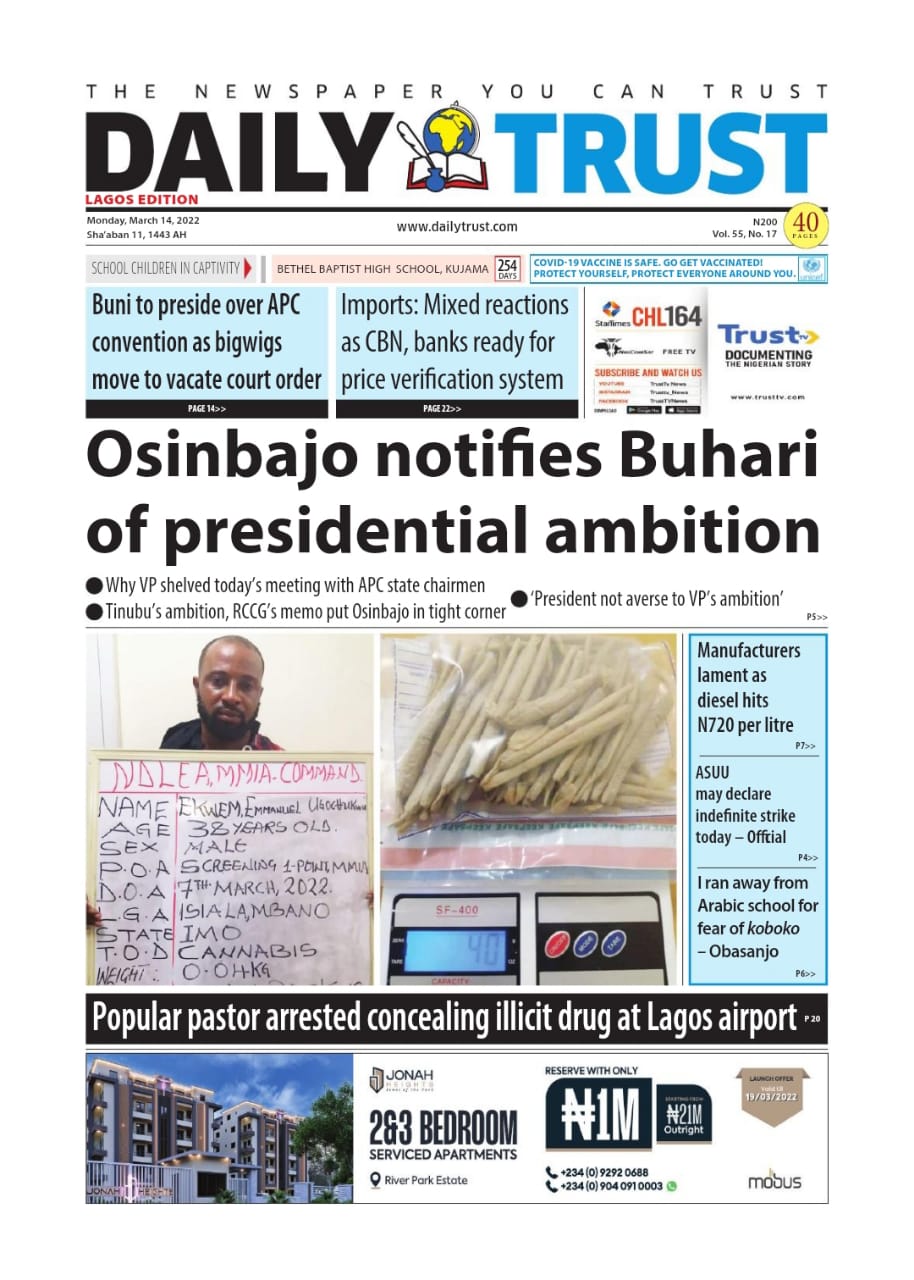 According to The Nigerian Tribune, The Manufacturers Association of Nigeria (MAN) is seeking urgent intervention from the Federal Government to support the production of goods, as diesel price hits N720 per litre. 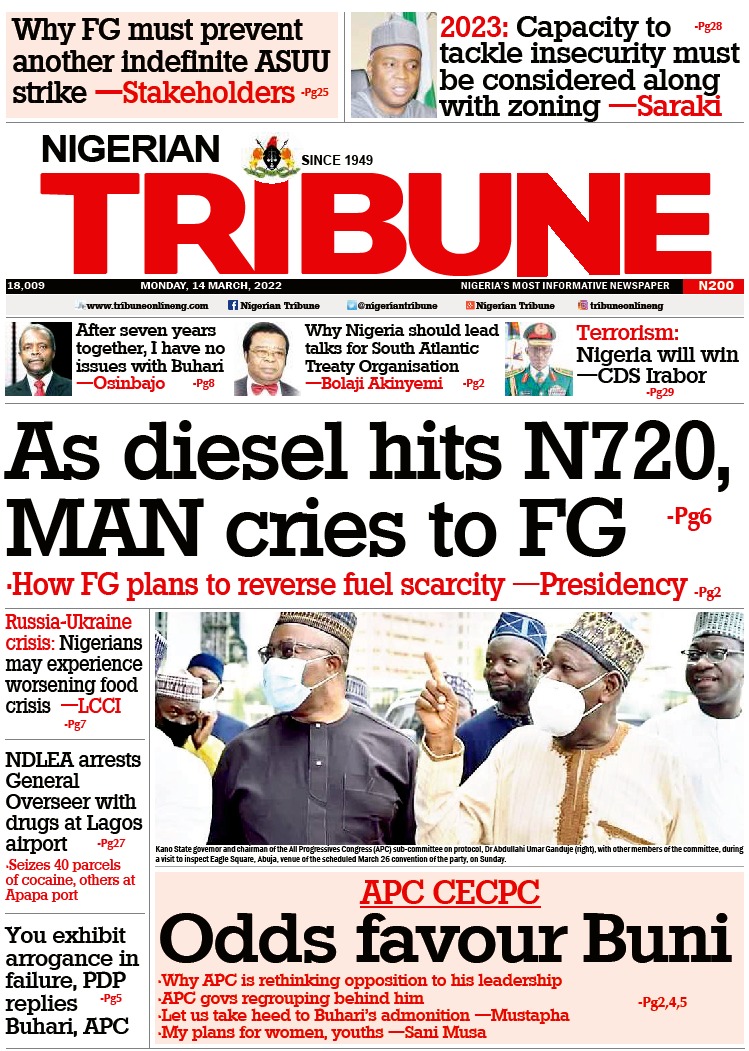 Nigeria loses about $200 million (about N91.6 billion at the official exchange rate of N416.34) annually to the foray of foreign carriers into multiple destinations in the country, Daily Independent reports. 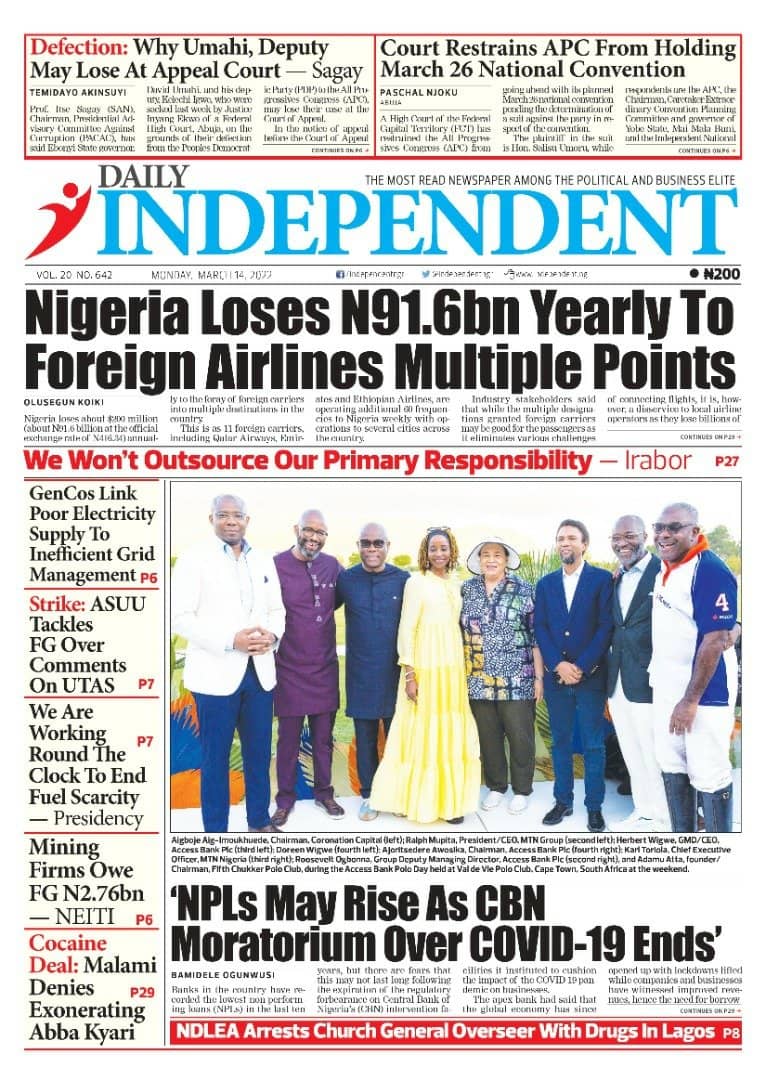